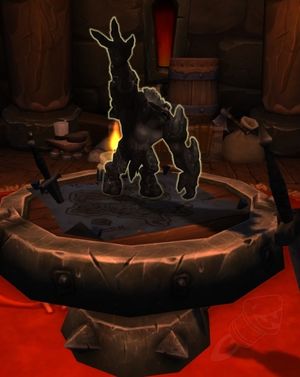 A Scale Model of Gorgorek can be found at Mok'gol Watchpost in Nagrand. It depicts the petrified magnaron Gorgorek in Gorgrond, and notes describing him can be found nearby:

<Written on a nearby piece of paper:
We have uncovered Gorgorek the Worldrender, an ancient magnaron frozen in the stone pools of Gorgrond. The Warsong elders believe this magnaron was a once-powerful alpha with the ability to command lesser beings of its own kind.
Ancient clan records suggest that the beast can be awakened.>

This miniature is discovered during the Garrison Campaign, and is one of the first clues of the Iron Horde's plans to use Gorgorek as a war beast.