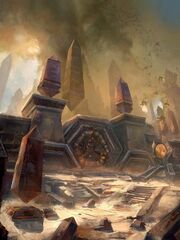 The Scarab Wall and the Scarab Gong. 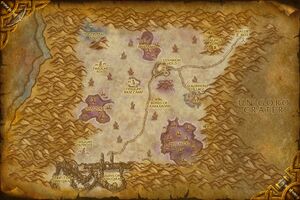 lies at the southern edge of Silithus, marking the boundary between the silithid-controlled desert and the ruined city of Ahn'Qiraj. It is an impressive structure which includes some sort of magical shield that also prevents creatures capable of flight to simply fly over it.

The opening of the Gates of Ahn'Qiraj was a World Event. While in-game a player attains the rank of

[Scarab Lord] when opening the wall, it is known that Shiromar was the one who rang the gong in the lore. This potentially means that she is the Scarab Lord when it comes to the storyline.

The Scarab Wall was one of the only two parts of Silithus to survive Sargeras's destruction of the zone, the other being Valor's Rest.

The Scarab Wall is a massive, slippery barrier bisecting Silithus. Standing a hundred feet high, this impassible obstruction stretches between the mountains from west to east. The lands beyond, which can only be seen by climbing a high cliff some distance away, appear much the same as the rest of Silithus—dry, windswept desert. The elves called the area beyond the Scarab Wall, Ahn'Qiraj. They advised to steer clear of it although it seems there is no way to breach or climb the wall, at least without the use of magic.[1]