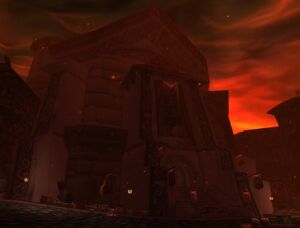 The Scarlet Bastion as seen in Stratholme. 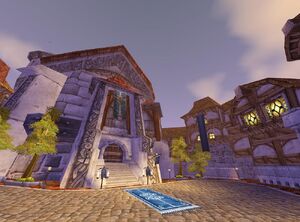 The Bastion of the Silver Hand as seen in the beta of Old Stratholme.

The Scarlet Bastion, formerly known as the Bastion of the Silver Hand,[1] is located in the western districts of the ruined city of Stratholme, in the plaza known as the Crusaders' Square. It contains the Hall of Lights, the Hoard, and the Crimson Throne.

It was formerly the barracks of the Knights of the Silver Hand,[2] and housed countless of their treasures.[3] Some time after the Scourge took control of Stratholme, the bastion was taken over by Scarlet Crusade and its Crimson Legion. Balnazzar, disguised as Saidan Dathrohan, made his stand there.

After the Cataclysm, Balnazzar shed its human disguise, killed every member of the crusade and raised them as undead forming the group called the Risen. After defeating the dreadlord, the Argent Crusade occupied the bastion.