Not to be confused with Marjan.

Scarlet Commander Marjhan is a level 42 undead at Tyr's Hand. She was formerly a level 60 elite quest giver at Light's Hope Chapel.

Scarlet Commander Marjhan served as an ambassador of the Scarlet Crusade at Light's Hope Chapel in the Eastern Plaguelands. She was engaged in a meeting with the Argent Dawn and Brotherhood of the Light, deciding how to counter the ever growing threat of the undead Scourge. She seemed to despise the Horde (standard Scarlet Crusader reaction), judging by her calling them "heathens... the revolting, unkempt Horde filth", and believes that finding the Ashbringer is the only hope for victory over the Scourge. She was not present during the Battle for Light's Hope Chapel.

After the Cataclysm, she somehow became undead and relocated to Tyr's Hand where she is targeted by the Brotherhood of the Light. 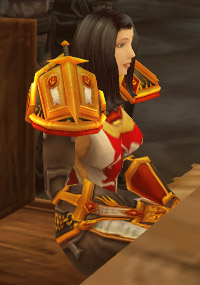 When she was alive.

The Argent Dawn might be impotent idealists but their delusional leader knows that they are outmatched. I have been sent here as an emissary of the Scarlet Crusade. An ambassador, if you will... It is doubtful that we could even dent the armies of Kel'Thuzad - united or not - but we might be able to contain them long enough for some sort of miracle to happen.

The cause of her undeath could be Balnazzar, and thus she could be serving the Risen.