The monastery was once a proud bastion of Lordaeron's priesthood - a center for learning and enlightenment. With the rise of the undead Scourge during the Third War, the peaceful monastery was converted into a stronghold of the fanatical Scarlet Crusade. The crusaders are intolerant of all non-human races, regardless of alliance or affiliation. They believe that any and all outsiders are potential carriers of the undead plague - and must be destroyed.

Reports indicate that adventurers who enter the monastery are forced to contend with Scarlet Commander Mograine - who commands a large garrison of fanatically devoted warriors. However, the monastery's true master is High Inquisitor Whitemane - a fearsome priestess whose guardians seem difficult, if not impossible, to fell in battle.[1] 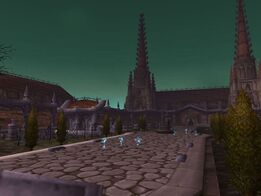 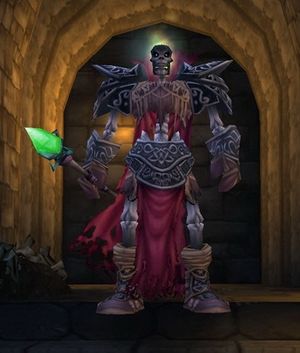 The Graveyard, the left-most entrance, is the easiest and smallest. The mobs are almost entirely undead; and, unlike most instances, most are non-elite.

In the Chamber of Atonement

In the Forlorn Cloister 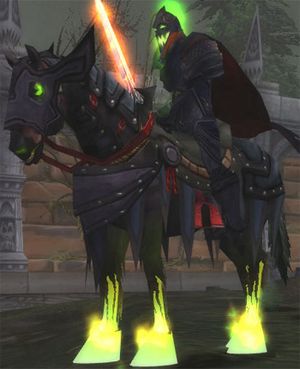 The Headless Horseman, who appears in the Graveyard during Hallow's End.