The Scarlet Onslaught is a faction that splintered off the Scarlet Crusade, and that traveled to Dragonblight in Northrend in their hopes of defeating the Lich King.[1] The Onslaught appears to care little about the original Crusade's wishes, as it employs shadow priests and even death knights into its ranks. Quotes from High General Abbendis in New Hearthglen imply that the Onslaught's goal is not just the destruction of the Scourge, but also of anyone that oppose them.

The Onslaught was largely dismantled, but ideologies aren't so easily killed.[2] This is seen in Legion as New Hearthglen continues to operate, even though it has lost the majority of its leadership and its goals have been dashed away.

At the time of the Onslaught's foundation, the Scarlet Crusade had been under constant siege, with the Alliance and the Horde attacking their forces at the Scarlet Monastery and in Stratholme. There was, however, one region of the Eastern Plaguelands which had been remarkably untouched by the plague that had despoiled the remainder of northern Lordaeron. This region was appropriately known as the Scarlet Enclave, consisting of the Scarlet capital of Tyr's Hand and the towns of Havenshire and New Avalon. These towns came under the protection of the Crusade forces stationed in Tyr's Hand, led by High General Brigitte Abbendis - the last survivor of the Crusade's original founders.

All that changed with the arrival of Acherus in the skies above the Enclave. In short order, the Scourge had established a base camp in the Ebon Hold's shadow and began their campaign of destruction. As the death knights of Acherus began to march on Havenshire, Abbendis claimed to receive visions from the Light, instructing her to take the most faithful of her troops and journey to Northrend. This became known among the Scarlet troops as the "Crimson Dawn", a revival of the Crusade and its "holy mission".[3]

The fall of the Scarlet Enclave

By that point, the death knights had laid waste to Havenshire and were now seeking to find out more about this "Crimson Dawn" mentioned in New Avalon's registry, taken from the town hall after they murdered New Avalon's Mayor Quimby. They discovered that a courier had been sent from Hearthglen by High Commander Galvar Pureblood, informing Abbendis that an army of Crusaders from Hearthglen and Tirisfal were being assembled to reinforce the Enclave and battle the forces of Acherus. One of the death knights, disguised as the courier (having murdered the real courier, taking his clothing and Pureblood's message), delivered the message to Abbendis. Realizing that the Plaguelands were lost, Abbendis ordered "the courier" to return to Pureblood, inform him to turn his armies around and prepare for the journey to Northrend. She gave "the courier" a copy of her diary, claiming it would explain everything. It was at this point that she declared that the Scarlet Crusade was no more - that they were now the Scarlet Onslaught.

The message never reached Pureblood, and his forces were annihilated by the Scourge as a result. With the combined army marching to their doom, High General Abbendis boarded her flagship, the Sinner's Folly, and set sail for Northrend, leaving the Crusade to its fate.

Sailing across the North Sea for many weeks and losing one of her ships to the kvaldir, Abbendis and her chosen followers made landfall on the coast of the Dragonblight in southern Northrend. Their banner was planted on the heights above the Forgotten Shore, where they began construction of their capital, New Hearthglen. This, Abbendis declared, was the "Crimson Dawn", the foundation of a new Crusade.

The main base of the Scarlet Onslaught.

Within a month of the Onslaught's arrival in Northrend, Abbendis received an unexpected visitor: Admiral Barean Westwind, the Scarlet Fleet commander who had been believed dead on these shores many years earlier. Westwind claimed to be the only survivor of his fleet and assured Abbendis that he was not there to usurp her, but rather serve as her adviser. The Admiral - secretly possessed by the dreadlord Mal'Ganis, thought to have been the first to fall to Frostmourne nearly a decade before - guided the Onslaught's actions from thereon out. Yet despite Westwind's assurances and the troops' belief that he would bring them victory, Abbendis suspected that the Admiral was not as he seemed... 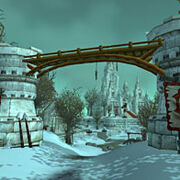 Adventurers of the Horde and Alliance destroyed the Onslaught and its leadership in Dragonblight and Icecrown.

Though their leadership was destroyed, the rank and file of the Scarlet Onslaught survived and continued their crusade against all who opposed them. When members spoke out against their atrocities, they were jailed and executed.[4] Many of these so-called heretics were rescued from New Hearthglen by the High Priest of Netherlight Temple, who sought their aid against the Burning Legion.[5]

The Onslaught primarily operates out of New Hearthglen, located in the Dragonblight, on Northrend's southern coast. There are two other bases in Dragonblight: The Onslaught Base Camp located north of the Carrion Fields beneath Naxxramas, and Scarlet Point east of the Crystal Vice.

There is also a more secluded base, Onslaught Harbor, set on a broken island off the mountainous, western coast of Icecrown.