For the mob of New Avalon in the Eastern Plaguelands, see Scarlet Crusader (mob). 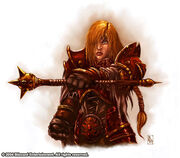 As they wander the blasted wastes, the undead creatures who call the Plaguelands home have learned to scan the horizon continually for the crimson garb of the Scarlet Crusade. Scarlet Crusaders come from many vocations — warrior, priest, wizard, scout — but all have one obsession: the complete and utter destruction of the plagueborn creatures who have conquered and occupied their ancestral homelands. Whether a red robe, a red tabard or red lacquered armor, a Scarlet Crusader wears the bright color as a brazen declaration that the red blood of the living still flows in her veins and a beacon calling her undead foes to battles. Though often seen traveling in squads, even a lone Crusader will charge into battle with a zealous rage to destroy both the undead and any she fears may be "plagued". The truly unlucky are those captured alive by a Scarlet Crusader and taken back to one of the Crusade's hidden encampments, where the Crusaders eagerly interrogate and torture prisoners for any information that will help the Crusade achieve its goals. Crusaders are predominately human, with only the occasional dwarf or high elf — they hate other races and blame them for everything bad as well.

Waging guerrilla warfare in the Plaguelands, a Scarlet Crusader masters the subtle art of finding her undead quarry. A Scarlet Crusader gets a great deal of quick experience tracking and killing her chosen enemies, the Undead. A scarlet crusader can focus his senses through the lens of his zealotry and gain the uncanny ability to detect nearby undead. As he hones his abilities, a Scarlet Crusader can soon sense the presence of undead enemies with little work.

Midnight rituals of the Scarlet Crusade imbue its devotees with the ability to "infect" the undead with the spark of life — and in doing so, make them vulnerable as normal mortals. Just as the Scarlet Crusade trains its members to manipulate their life force, it also trains them to protect it. As a Crusader becomes more powerful they can use their life force to incinerate any who stand in their way.

All inductees into the Scarlet Crusade receive a crimson ring that reminds them not only of their devotion to the cause, but also of their ability to create a crimson circle that will prevent undead creatures from crossing its boundaries. Clever members of the Crusade have learned to use this ability to imprison the undead, either for questioning or slaughter. Once a Scarlet Crusader has proven his or her devotion to the Crusade, they are introduced to the dark art of interrogation. A Scarlet Crusader who has mastered the art of interrogation can inflict such pain that a creature cannot help but reveal all the Crusader wishes to know.[1]