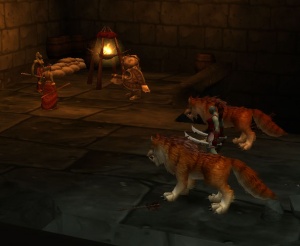 A group of Scarshield Legion orcs.

The Scarshield Legion is a division of Rend Blackhand's Blackrock orcs that reside primarily in the lower levels of Blackrock Spire, where they breed and train attack worgs. They are the gatekeepers to the inner sanctum of Lower Blackrock Spire.

The defining characteristic of this organization of orcs is their use of worgs in battle, evident by their swarming numbers within the halls of Hordemar.

Unlike the normal raiders, however, the Scarshield Legion has been seen fighting alongside the worgs, as opposed to on the backs of them. The reasons for this are unknown, but it is likely due to the close quarters of the Legion's current residence, making most of the members' destinations within the City reachable by foot. Given the need, however, it is likely that the Scarshield's worgs double as mounts. 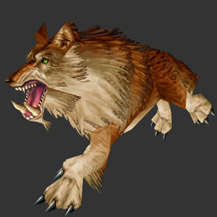 “Some say the worg controlled by the Blackrock orcs are the creation of a supernatural force. Others say they are not true worg but instead a breed of demon dog, granted to the orcs by a fallen pit lord. The truth is far less contrived but every bit as frightening.”

The vast population of worgs within lower Blackrock Spire is easily achieved by the Legion's role to breeding the beasts, as well as train them. Despite the common rumors and belief that the Legion's vicious canines are the product of something otherworldly, their conceiver is not far off. The Legion currently cares for and provides home for the giant Halycon and her equally large mate Gizrul the Slavener, the parents of nearly all battle-ready Scarshield and Bloodaxe worgs. Both are kept in lower Blackrock spire where they are tended to and heavily guarded, despite their capability to hold their own.

It is possible that when Rend and Maim Blackhand fled to Blackrock Mountain they brought with them other surviving members of the raiders of the First War with whom they forged the Scarshield Legion.

Alternatively, the Scarshield Legion may have existed as a raider group in the Old Horde during the First War.