From Wowpedia
(Redirected from Scenarios)
Jump to: navigation, search 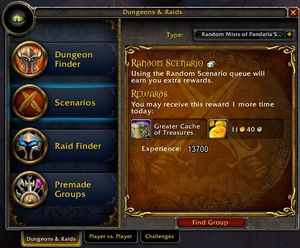 Scenarios, introduced in Mists of Pandaria, are short, 3-player instances, with progressive objectives and a story arc. Scenarios are completely role-less, meaning tanks or healers aren't necessary to succeed - any class combination can work. Smaller scenarios play similar to group quests and help players earn faction reputation, while larger scenarios play out like epic PvE battlegrounds with major objectives and plenty of scripted events. They are instanced areas.[1]

From Warlords of Draenor onwards, there are no new endgame scenarios, and thus, no scenario rewards. Instead, some quests use scenario mechanics, which are seamlessly integrated into the main world using phasing, rather than being their own instances.[2] In Legion, the Deaths of Chromie was added.

Through the group finder

Queuing for scenarios works identically to queuing for a dungeon, and is accomplished via the Scenarios pane of the Group Finder interface (default hotkey: I). Players can choose a specific scenario, or opt for a random scenario. Completing a random scenario will reward the player with roughly 20

[Greater Cache of Treasures] that may contain either additional gold or a randomly enchanted piece of level 90 equipment tailored to their class (though not necessarily their spec).

The scenarios group finder is not available for players level 91+.

Starting from level 91 you can't use the Group Finder interface for scenarios anymore. At the Seat of Knowledge you can still talk to Lorewalker Fu to queue for Normal scenarios, Lorewalker Shin for Heroic scenarios and Lorewalker Han for old LFR raids.

Starting from a very rare drop, warlocks can undertake a very difficult solo-scenario to turn their fire green in Pursuing the Black Harvest.

The one repeatable single-player scenario is Troves of the Thunder King, the loot-grabbing scenario that requires a

[Key to the Palace of Lei Shen] to begin.

Additionally, as part of Wrathion's legendary quest, he starts the solo scenario

The Proving Grounds, added in Patch 5.4.0, uses the scenario mechanic. There is also one repeatable scenario as part of the Timeless Isle cooking chain. The quest

[90] The Secret Ingredient Is... is the walk-through and completion of this opens the dailies

The Celestial Tournament takes place in a single-player pet battle scenario, where players face a series of pet tamers and battle pets. This scenario is repeatable.

These scenarios were planned, and appear in the game files, but have not been released.