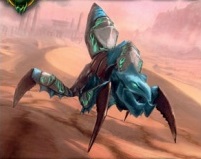 Scepter of Azj'Aqir is a rare archaeology artifact that requires 450 skill to find and 150 Tol'vir Archaeology Fragments to solve. Up to three

[Tol'vir Hieroglyphic] keystones may be used to complete it. When you use the Scepter it summons an Ultramarine Qiraji Battle Tank mount.

This is the second mount obtainable with Archaeology, the first being the

[Fossilized Raptor]. It joins the

The Tol'vir sorcerer Azj'Aqir was said to possess a scepter that would allow him to control a Qiraj battle tank outside of its Silithus home. 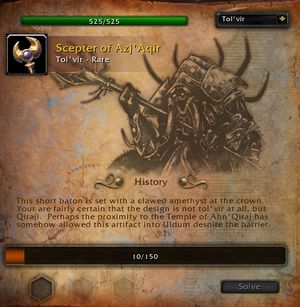 This short baton is set with a clawed amethyst at the crown. Your are fairly certain that the design is not tol'vir at all, but Qiraji. Perhaps the proximity to the Temple of Ahn'Qiraj has somehow allowed this artifact into Uldum despite the barrier.

The aqir were a race of incredibly evil, expansionistic insects who battled the troll empires for thousands of years. Eventually, the great Azj'Aqir civilization split in half, with Azjol-Nerub in the north, and Ahn'Qiraj in the south. The night elves were able to contain the qiraji for many years until they were awakened again by the Old God C'thun.