From Wowpedia
(Redirected from Scholomance (original))
Jump to: navigation, search

For the lore of the zone and its status after Mists of Pandaria, see Scholomance. 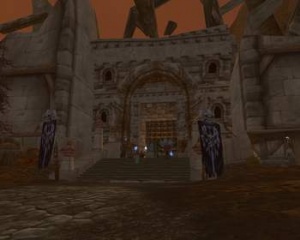 The entrance to Scholomance 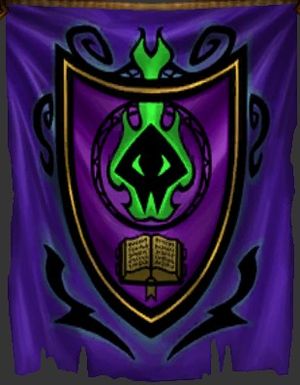 The banner of Scholomance

The Scholomance (SKOH-loh-mance), a vile academy for prospective necromancers of the Scourge, is located in the ruins of the palatial House of Barov, on a rise overlooking the abandoned city of Caer Darrow. The enemy level range is 40-43 and requires that you be at least 38 to enter through the Dungeon Finder.

The Scholomance was founded by the rogue wizard Kel'Thuzad nearly ten years ago. His Cult of the Damned renovated the ancient crypts beneath Caer Darrow (an old Arathorian fortress) and turned them into a school for necromancy. The Cult used this place to train its mortal agents and prepare to unleash the Plague of Undeath upon Lordaeron. It has been brewing with young talented wizards and adepts all this time. No one in Lordaeron knew. Originally, the Barov family (of Alterac)[citation needed]  owned the land and gave it to the Cult in exchange for the Lich King's blessing of immortality. Now the Barovs remain as undead monsters. One of Kel'Thuzad's mightiest agents, the Ravenian, also lives within the recesses of the school — ever ready to devour those students who show any sign of weakness. The lich Ras Frostwhisper rules over the site and guards it for the Scourge, but the mortal necromancer, Darkmaster Gandling, serves as headmaster of the school, succeeding Araj the Summoner[1] who was headmaster after Kel'Thuzad.

The Scholomance is housed within a series of crypts that lie beneath the ruined keep of Caer Darrow. Once owned by the noble Barov family, Caer Darrow fell into ruin following the Second War. As the wizard Kel'thuzad enlisted followers for his Cult of the Damned, he would often promise immortality in exchange for serving the Lich King. The Barov family fell to Kel'thuzad's charismatic influence and donated the keep and its crypts to the Scourge. The cultists then killed the Barovs and turned the ancient crypts into a school for necromancy known as the Scholomance. Though Kel'thuzad no longer resides in the crypts, devoted cultists and instructors still remain. The powerful lich, Ras Frostwhisper, rules over the site and guards it in the Scourge's name — while the mortal necromancer, Darkmaster Gandling, serves as the school's insidious headmaster.

At release, Scholomance was an extremely challenging dungeon. Typically, the dungeon was raided in 10-man parties, with a difficulty similar to Upper Blackrock Spire. Subsequent patches in the summer of 2006 changed Scholomance drastically. Mobs were weakened slightly, and a great many were removed. However, Scholomance could no longer be run with more than 5 party members. At the time, this "Scholo Nerf" was a common topic for party chat among long-time players. Loot in Scholomance has changed gradually over time. Originally, each boss dropped some relatively weak loot. The dungeon waned in popularity as players saw little point in running it after they had completed their quests and acquired their Dungeon Set 1 hat. Blizzard again patched the dungeon. At this point, Scholomance drops a moderate amount of fairly useful items, including a very small chance at the epic [Headmaster's Charge] and [Alanna's Embrace]. The rewards available from the Argent Dawn have also broadened through patches. Scholomance is a staple source of Argent Dawn reputation and Scourgestones. Players seeking Argent Dawn tradeskill recipes, resistance enchantments or Armaments of the Dawn often spend a great deal of time in Scholomance or Stratholme.