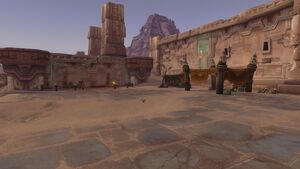 The western side of the outpost, including Mugjabu's stable.

The Scorched Sands Outpost is a camp nestled in a set of ruins in southern Vol'dun, just west of Zul'Ahjin and southwest of Atul'Aman. To the south lies the Arid Basin, while following the road west leads to the Exiles' Enclave, Camp Lastwind, and eventually the Port of Zem'lan. The outpost is home to a tribe[2][3][4][5][6] of Zandalari outcasts led by Razgaji, who is standing at the nearby Scorched Sands Arena.[1]

Despite frequent sandstorms and short supplies, the exiles here have begun to herd alpacas among the harsh terrain. Keeping the herd safe from the likes of hyenas, Vol'duni Dunecrawlers, and saurolisks can be trying at best,[7] but the alpacas' meat and milk are essential to the tribe's survival[8] and surviving off the land has hardened these people. They don't trust outsiders, and marauders holing up in the Scorched Sands Arena regularly plague this fragile settlement, stealing what little supplies they have.[7] The exiles used to frequently trade with the Tortaka tortollans.[9]

After Horde adventurers aid Julwaba in Zul'Ahjin, she travels to the Scorched Sands Outpost and invites the heroes to join here there.[1] After adventurers arrive, they discover that the outpost is threatened by Mojambo, the leader of a rival gang of exiles of which Razgaji was once a member. While the adventurers help Razgaji convince Mojambo to leave, the marauder leader promises to return and kill Razgaji.[10] Adventurers subsequently help the exiles around the outpost gather supplies and prepare for Mojambo's attack, but soon hear from Zauljin that Mojambo has hired Tongo's gang to assist in the assault.[11] Just as heroes finish killing Tongo[12] and arming the Scorched Sands outcasts with weapons from Tongo's crew, Mojambo's gang attacks the arena.[2] The adventurer uses Tongo's head to challenge Mojambo to a duel that ends in the hostile gang leader's death, thus saving the Scorched Sands Outpost.[13]