Not to be confused with scorpion.
For the critter, see scorpid (critter). 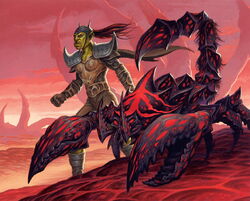 An orc huntress with her scorpid pet

The scorpid are gigantic creatures similar to scorpions and arachnathid. They measure an average of 3 ft. long.[1]

They attack anything they perceive as a threat with their claws and stinger, which holds venom capable of killing creatures up to 100 times its own body weight.[2] When stung, the venom causes rapid suffocation followed by violent seizures, and shortly after, death.[3] Although tail venom of most scorpids is the most deadly, it is the bite of the diminutive scorpling that is the greatest threat.[4] Some species also have venomous pincers.[5] Hunting and killing scorpid is considered a rite of passage by the orcs.

Scorpids speak in complex clicking and chittering sounds, which sentient beings can actually learn and communicate with, such as Zathra.[6]

Cataclysm introduced a second model for scorpids, which is used by some of the new scorpid and scorpion mobs. 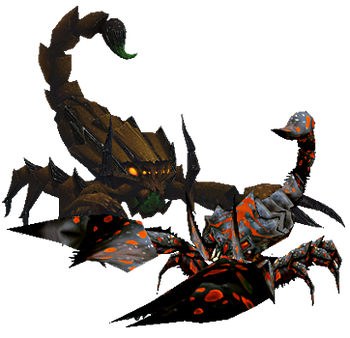 Since the cataclysm, the following species of scorpid have disappeared from the game, presumably having gone extinct.

In addition, several scorpids, or scorpid-like creatures are found amongst the silithid. It is possible that other species of scorpid also worked for the silithid.

[Reins of the Kor'kron Annihilator] is sold to players for 1500

after completing the achievement

[Guild Level 25]. The reins use the second model of Scorpid.

Scorpids are quick, vicious, poisonous predators who stalk sand dunes in search of prey. Scorpids possess a strong racial identity; they band together to fight interlopers, form family units called nests, and willingly ally with other scorpids. Scorpids eat meat, including carrion, but prefer freshly killed food. They live underground, digging burrows in soft sand or earth. Scorpid females are indistinguishable from males to the naked eye, but after giving birth, a scorpid female carries her young on her back until they are old enough to fend for themselves (a period of 2-3 weeks). On average, a scorpid female gives birth to ten to twenty live young at a time, each one no bigger than a rat.

Scorpid young routinely molt, shedding their old, soft skin and growing a harder carapace in its place. Scorpids molt 5 to 6 times before reaching maturity. Cautious travelers watch for shed scorpid skins when traveling in the desert.

Scorpids grow to about 3-1/2 feet in length and 2-1/2 feet tall. They are heavy for their size, weighing 60 pounds when fully grown. Scorpids come in many colors, including black, yellowish brown, red, and a mottled white that blends with moonlit desert dunes. A strange quality of the scorpid's carapace causes it to fluoresce weakly in certain underground environments, such as an area with phosphorescent plants, moss, or fungi.

Scorpids live an average of thirty years. Solitary scorpids retreat and seek out assistance if they know a fellow scorpid is close enough to render aid; scorpids always try to attack in groups if they can. As many scorpids as possible target an individual in combat before moving on to a new enemy. Scorpids can opt not to poison an enemy when making a sting attack, but they rarely choose to do so. Sometimes, though, scorpid groups reserve their poison and make nonlethal attacks to subdue weak enemies. They then drag the unconscious foe back to the nest to teach their young to kill.[7]

The Scorpid dunestalkers are a more powerful version of scorpid, growing to 5 feet in length and 3-1/2 feet tall, and weighing close to 600 pounds. The strongest usually serves as a nest’s leader. They are swift, silent killers, using stealth and sneak attacks to great effect.[7]