For lore about scorpions, see Scorpion.

Creatures of the arid lands, these giant arachnids strike with venomed stingers that are located in their tails to kill their prey. The poison they employ is extremely painful, and is a slow and wicked death. They are hunters by nature that will attack anything that strays near their nests.[1]

Hunters of the underground, these are as venomous and deadly as any creation of the Warlocks. Their tails are tipped by a sharp spike, and can tear through the armor and flesh of their prey to inject a deadly and painful poison into the unfortunate. The Humans have learned to command the smallest of these fiends, and can summon them to do their bidding.[2] 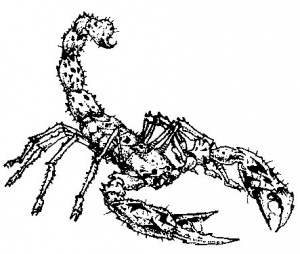 A Scorpion as seen in the Warcraft: Orcs & Humans Manual.

Scorpions can be summoned by Conjurers. They are expendable fighting units best used for scouting; pretty weak and useless in open combat. They can also serve as cannon fodder for Catapults, while distracting the Catapults, rear in some units and dispose of the Catapults.