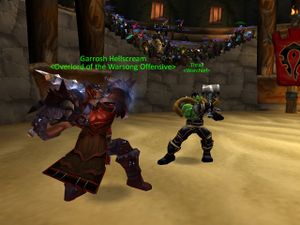 The mak'gora between Thrall and Garrosh. 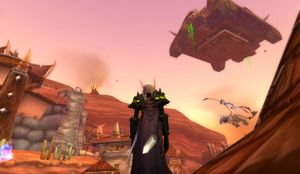 The necropolises of the Scourge invading.

Part of the Scourge Invasion was fought in Orgrimmar.

Garrosh Hellscream, who was clearly displeased with warchief Thrall's lack of immediate action against the humans and the Scourge, challenged the latter to a duel (though Thrall had to force Garrosh by "insulting" his father).

When the two were dueling, the Scourge attacked the city forcing the two orc leaders to stop their duel and take up arms against the undead fiends. Backed by many adventurers, Orgrimmar Grunts,[1] Orgrimmar Defenders, and Lady Sylvanas Windrunner's skeletons [2] the Horde defended its capital, fighting tooth and nail. Despite the handicap of having no air forces, the Orgrimmar Defenders (despite many of their number being eaten by the frost wyrms) and the local adventurers who just returned from Outland, were able to take them down while the ground forces fought the abominations and death knights.

A moment later the Herald called back his forces, taunting the Horde to Northrend. After mopping up the few Scourge left, the warchief was forced to form and send the Horde Expedition towards Northrend, thus properly beginning the war against the Lich King.

Comic version of the battle

Although the same event, the comic and the game show some differences: