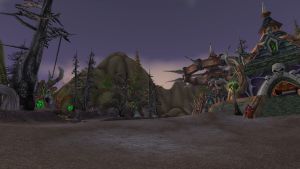 The Scourge base seen from its entrance.

This nameless demon-controlled Scourge base is located in the Hyjal Summit area during the Battle for Mount Hyjal. The waves of Scourge forces that attack the Alliance Base spawn at this area's entrance.

The base is made up of buildings and units rather similar to how they were in Warcraft III. There is a ziggurat, two crypts, a plague cauldron, a slaughterhouse, and the stone gazebo structure otherwise only seen in the Undercity's Rogues' Quarter. There is even a small Abomination-building workshop.

The base is populated with ghouls, necromancers and abominations. Several meat wagons can also be seen. As more nods to the RTS, the ground looks blighted and the necromancers are wearing red, a nod to their Warcraft III appearance.