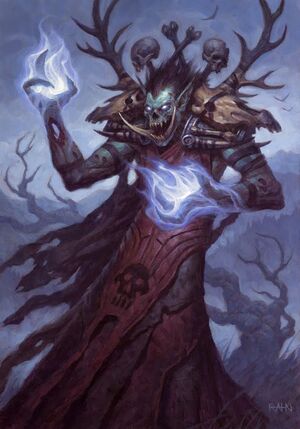 Art of a risen Drakkari troll.

A Scourge troll[1] is a troll that has been turned undead by a version of the plague made to specifically work on trolls and has become a withered troll. A Scourge troll's eyes are a pale, milky blue and its skin is a sickly green with strange, light gray splotches. A Scourge troll sways as it walks, its long hands dragging on the ground, its knees barely bending with each stride. Its small eyes stare straight ahead, and it does not swerve to avoid obstacles but plows through them. It staggers around with no clear purpose and follows any movement it sees. The minute it sees another living creature it attacks, trying to kill the target. These trolls were not very bright when alive and are even less so now — if attacked from multiple directions they grow confused and disoriented. Most Scourge trolls are ice trolls as the plague variant was first tested on them.[2] 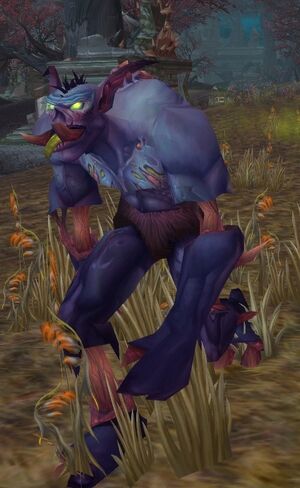 Scourge troll in World of Warcraft.

Undead ice trolls from Zul'Drak served under Overlord Drakuru after his allegiance to the Scourge:

After the Lich King's defeat, many undead ice trolls could also be found serving the Drakkari who joined the Zandalari at the Throne of Thunder. They were infected by a deadly plague, and the foul necromantic magics that animated these last remnants of the Drakkari tribe left them bereft of intelligence and purpose, causing them to attack random targets:[3]