This article is about the RPG class. For other uses, see Scout (disambiguation). 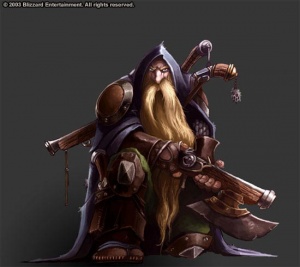 Scouts of various races serve the Horde, Alliance and neutral and hostile organizations in Azeroth and beyond.

The scout excels in wilderness survival and is skilled in combat. They can track a day-old trail and snipe from the treetops with equal facility. Scouts often serve as guides for adventurers, if they are not out adventuring themselves. Though the scout is at home in the wild, they are more a guerrilla fighter than a defender of nature. Scouts are found in any race. No matter their region, from forests to mountains to swamps, all races need and train scouts as guilds and specialized fighters. Scouts are solitary and have somewhat individualistic natures.[2]

Satyr scouts are the antithesis of everything that night elf scouts stand for. While their hated night elf cousins fight with bows and use their abilities to tend the forests, satyr scouts prefer hand-to-hand combat, striking by surprise, and dominating nature for their demonic masters. Satyr scouts use wild healing selfishly, not bothering to aid another unless they get something out of it.[3]