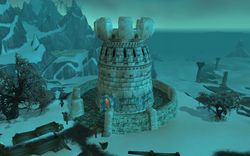 Scarlet Tower in the Dragonblight.

Scout towers (also sometimes called watchtowers[1][2]) are the first necessary step in Alliance town defense. Ideal to watch over positions, they are unarmed, but they can later be upgraded to become guard towers and cannon towers.

Scout towers were tall, sturdy structures constructed to guard the borders of many settlements. From these sites, the defenders of Lordaeron could spot enemy troops from high above, making it difficult for the orcs to launch surprise attacks. Their presence in the wildlands assured the swift deployment of Alliance armies to meet any orc incursion. These towers could be outfitted with either deadly bolts that could pierce targets on land, sea, and air, or with great cannon that while powerful, couldn't attack threats from above.[3]

Scout towers may be constructed at almost any location to provide continuous on-site observation. The towers are also the first necessary step in human town defense. These structures may later be upgraded to guard or cannon towers.[4]

It was a common tactic of the Alliance of Lordaeron to build their towers behind some farms.[5] Ivory Towers were also usable during the Third War. 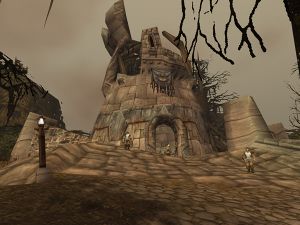 Scout towers are very common in World of Warcraft and can be found all over Azeroth, Outland and alternate Draenor. While many towers, especially the ones in Lordaeron, have been abandoned or destroyed, there are still quite a few that remain intact.

Ironically, the tower built between Tarren Mill and Southshore was built to symbolize the bond of friendship and brotherhood between the two cities.[6]