Scouting Report: Like Jinyu in a Barrel
Level: 86 (Requires 85)

With our leader turned to jade, our hozen guide disappeared, and a prisoner of war in tow, there was only one thing that Kiryn and I could do:

March into our enemy's territory and deliver some vengeance.

Want to know how it went?

You will also receive: 37

The most important thing we learned was that... not only have the Alliance befriended the jinyu, but they're giving them weapons, and teaching them how to use them.

The Alliance now control a force that outnumbers us thirty-to-one. And we - the HORDE - have befriended monkeys. 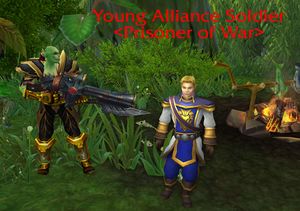 We set up a small camp in the hills above the jinyu village.
With nobody to watch over our prisoner, I had to make sure he was... incapable of escaping.
Young Alliance Soldier says: Wha-?
Shokia whacks the soldier unconscious.
I approached my snipe rifle and took aim at the jinyu village.

Walk over to the nearby mounted sniper rifle.

Kiryn had made it to the jinyu village. I spotted her lurking in some bushes on the village's edge.
Straining my eyes, I could just barely read her lips, as she said:
Shademaster Kiryn says: Shoot all the guards, so I can move ahead.

Aim the cursor for the guards, then right-click them to kill them.

Shademaster Kiryn says: Nice work back there! One more time!

Shademaster Kiryn says: Let's see if my hozen poison works on jinyu! Try not to blow me up, Shokia!
The center of the jinyu village was clear. Just to be safe, Kiryn planted some explosive barrels for me to shoot.

Wait for kiryn to plant the three barrels, then shoot them to make them explode.

Shademaster Kiryn says: That'll teach the jinyu and the Alliance to mess with us! Let's get out of here!
Shademaster Kiryn yells: Shokia, they've spotted me! Give me cover!
The coast was clear. Kiryn began to make her escape.
Kiryn runs over the lake, but gets trapped in a net!
Damn, another jinyu net! We were so close, too...
I sensed a commotion in the village's eastern island.
Out of nowhere, Riko appears, who is ready for some revenge on jinyu.
Riko yells: I'M BACK, YOU DOOKERS!

Aim for the guards to kill them before they kill Riko first! When the guards are gone, Riko runs toward Kiryn.

Riko yells: I on way, Kiryn! And I don't care about you weird dead face!
Riko says: Come on, Kiryn! Let's get the ook outta here!

After completing, Nazgrim comes to the location.