Were you looking for the Warcraft III item Scroll of Resurrection? 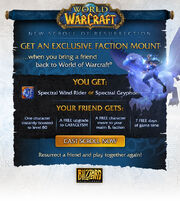 The Scroll of Resurrection was a method introduced by Blizzard to lure back players who have quit playing World of Warcraft. By entering either an email address or the name and realm of the character the recipient last played on, players with an active account could try and get somebody back to play the game. As of February 18, 2014, the Scroll of Resurrection is no longer available.[1] With the release of World of Warcraft: Warlords of Draenor, it was replaced by the Character Boost service.

The New Scroll of Resurrection

[Spectral Wind Rider] or a

[Spectral Gryphon], while their friend received:

The returning player would also:

Pandaren characters who had not yet chosen a faction (Alliance or Horde) were ineligible for the level boost. Monks were also ineligible, regardless of race.