For the artifact weapon, see 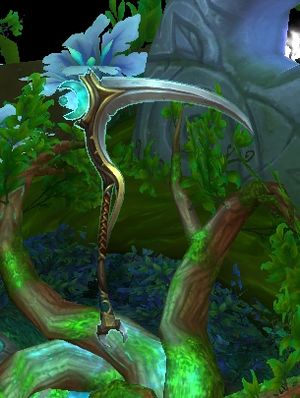 The Scythe of Elune's default skin in Legion.

“But most of all I have come to learn what Malfurion himself no doubt knew... what my mother and Mel'Thandris understood... That the Scythe is a menace, a cursed abomination, a beacon of death and destruction. A thing that never should have been.”

The Scythe of Elune is a mystical artifact created from Goldrinn's fang and the Staff of Elune.[2] It is described as an ancient weapon - a twisted and gnarled branch of wood covered with runes that could be older than even the Kaldorei. Those who are not careful enough can easily be overwhelmed by Goldrinn's spirit, which infuses the scythe. Tied to the origin of the worgen on Azeroth, the scythe is said to possess untold lunar power for the druid with balance enough to keep control.[3]

The wielder of the Scythe of Elune is called Nahlen'do by the Druids of the Scythe, which means "Master of the Fang" in Darnassian.[4]

The Scythe of Elune is the artifact used by balance druids in World of Warcraft: Legion. 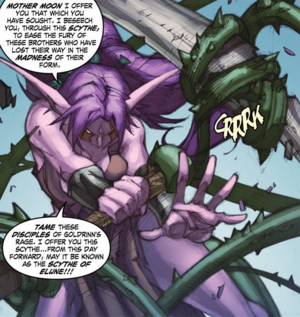 Belysra Starbreeze and Ralaar Fangfire created the scythe by affixing one of Goldrinn's fangs to Belysra's staff. Ralaar and the Druids of the Pack sought to temper the uncontrollable rage inherent in the druid Pack Form by willingly submitting to the energies of the Scythe of Elune. Rather than abate the druids’ fury, however, the weapon transformed Ralaar and his followers into worgen: bestial humanoids enslaved by their own primal instincts. Blinded by all-consuming rage, Ralaar’s druids tore through friend and foe alike during the battle with the satyrs. Night elves wounded by the unruly beasts contracted a virulent curse that turned them into worgen as well.[2]

Desperate to stanch the affliction's spread, Archdruid Malfurion Stormrage mournfully banished the worgen beneath Daral'nir within the Emerald Dream, where they would be in peaceful slumber for all eternity.[5] The Scythe was then entrusted secretly to Mel'Thandris and then forgotten.

Velinde Starsong, the niece of Mel'Thandris, was sent to cleanse Ashenvale of demons after the Third War and prayed to Elune for aid on her task. She prayed and prayed as she sought out an answer, and was eventually led to a book in Darnassus, set there by Fandral Staghelm to expose the mistakes of Malfurion Stormrage, that explained the War of the Satyr and the Scythe of Elune. Velinde made way to the Shrine of Mel'Thandris, where she discovered the Scythe of Elune hidden away. The weapon had the power to weaken the barriers of time and space, and holding the scythe in her hands, she received a vision of chaos. Wolf-men, the worgen, fought savagely, as fit their primitive race, but they faced an unflinching enemy: the satyrs known as the Lords of the Emerald Flame.

It was then that Velinde realized the true power of the scythe. By focusing on it, she was able to communicate with the worgen. However, it was not speech she used to contact them. The worgen heard and understood her. By further channeling the energy of the scythe, the barriers weakened more, and she was able to draw the worgen to Azeroth. She summoned a score and a half. The worgen followed her into battle and, with their brutish strength at her command, they tore into the demons of Felwood. Later, she noticed, that though she had not summoned additional worgen, their numbers continued to increase. It was as though the scythe no longer required her intervention for the summoning process.

Velinde heard that the archmage Arugal had also summoned worgen. She traveled to the Eastern Kingdoms to meet with him, hoping he could provide help. In Duskwood, Velinde was attacked by Varkas at Roland's Doom. A case of dynamite exploded during the struggle, killing Velinde, Varkas and his three minions, and trapping the Scythe within the cave.[1] Jitters would find it some time later, releasing the worgen into Duskwood.

The dark mage Morganth and Dark Riders from Deadwind Pass were known to be searching for it. Ralaar Fangfire, now called Alpha Prime, was one of the worgen summoned by Arugal. Alpha Prime also sought the Scythe of Elune and created the Wolf Cult to find it so he could free the rest of the imprisoned worgen and attack Darnassus.

While pursuing the Wolf Cult in Duskwood, the party of Revil Kost came upon Jitters hiding in the ruins of Raven Hill. Jitters told them that the Scythe had been rediscovered at Roland's Doom, and that the Dark Riders were seeking it. It appeared, however, that the Wolf Cult had got to the Scythe first, and were using it to perform dark initiation rituals. Having slaughtered the members of the cult, Revil liberated the Scythe from the mine. At the behest of Brink, an agent of SI:7 sent to retrieve the artifacts that the Riders had stolen, Revil used the Scythe to lure the Dark Riders into an ambush.

The Scythe later passed into the hands of Brink, who intended to deliver the Scythe to an unnamed night elf, most likely Valorn Stillbough.[6] 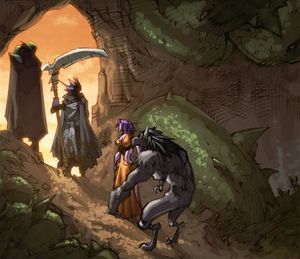 The Scythe is brought to Gilneas.

Valorn Stillbough brought the Scythe to his fellow night elves in Gilneas mere days after its liberation from Duskwood.[5] It was stored safely in the Blackwald, but temporarily stolen by the Forsaken until a worgen adventurer retrieved it.[7] Belysra Starbreeze attempted to use the Scythe to banish Alpha Prime and his Wolf Cult back into the Emerald Dream, but Alpha Prime was instead killed by the ghost of Arvell.

After the events in Gilneas, the Scythe was returned to Darnassus,[8] but was later approved by Tyrande Whisperwind to be delivered to the druids of the Dreamgrove.[9] Belysra and Valorn thus traveled with the Scythe of Elune to Duskwood to further their studies of the worgen.[10] and to meet with the new Archdruid of the Dreamgrove. On orders from Tyrande, they brought it to the Twilight Grove in Duskwood to give it to the druid adventurer. When the druid arrived via the Emerald Dream, however, Valorn was quickly attacked by Ariden and the Scythe was stolen, putting it in the Dark Riders' hands at last. As Belysra stayed with Valorn, the druid met with Revil at Manor Mistmantle and worked alongside him to retrieve the Scythe from the Riders at Karazhan.

In the quest The Howling Vale sends adventurers to the ruined shrine of Mel'thandris to discover the origins of the 'mysterious wolf-men' who have overtaken the area. Upon viewing the tome of Mel'Thandris, you see a vision of Velinde Starsong pleading with Elune and presumably being granted a scythe.

The numbers of my companions dwindles, goddess, and my own power shall soon be insufficient to hold back the demons of Felwood. Goddess, grant me the power to overcome my enemies! Hear me, please, my need is desperate and cause is just! What... what is this? Could this be the answer to my prayers? Elune has granted me a weapon--this scythe--to defeat the demons.

[Jitters' Completed Journal] contains a passage about the events immediately following the re-discovering of the Scythe of Elune. The unfortunate people there to witness it were afflicted by a strange phenomena:

After the Scythe was freed, a change rippled through the mine. Light from our flickering torches warped, and the strength of our voices seemed beyond our control. Sometimes a man's whisper roared through the tunnels forcing hands on ears, and sometimes our shouts barely travelled a few steps before diminishing into a hint on the wind.