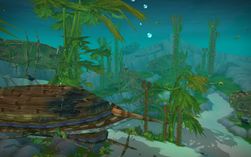 Seafarer's Tomb is an area in northern Kelp'thar Forest covered in sunken Alliance vessels, most notably The Briny Cutter, where Alliance players are taken to after being rescued from the attacking naga. To the west is Legion's Fate, where the Horde vessels now make their home.

During the World of Warcraft: Cataclysm beta, this area was known as Honor's Tomb.