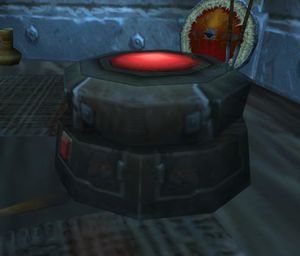 Seaforium is a type of volatile explosive compound in the Warcraft universe that can come in a powder[1] or a malleable putty.[2] It is most often portrayed as being used in bombs and other such high explosive devices, but has also been used in low explosives, most notably as a powerful (and very dangerous) rocket fuel. According to Ashlan Stonesmirk, "Seaforium is harmless enough, but once it's wet it could blow Ironforge out of the mountain."

In terms of items, seaforium usually refers to the various kinds of Seaforium charges found in-game:

There is also a quest item, [Seaforium Booster].

[18] To Win a War, You Gotta Become War, the player plants seaforium charges in Render's Valley, Redridge Mountains. The result of the aftermath explosion is known as Render's Crater.

[76] Our Only Hope, the player frees a storm giant from its cage by using a Jumbo Seaforium Charge.