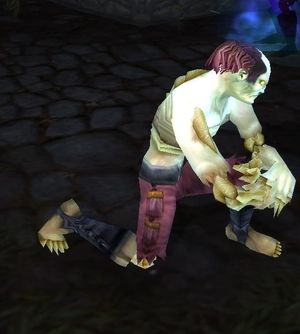 Sean Dempsey is a human who got wounded during an attack from the hostile worgen within Stoneward Prison. The Gilnean player protects him and his companions Darius Crowley, Tobias Mistmantle and Vincent Hersham during an other worgen attack.

It seems that he was somehow eaten by crocolisks afterwards. Forsaken players find his head after killing one of the beasts and return it to Lord Godfrey. After finding Sean's torso, appendages and giblets as well, he gets reanimated as a Forsaken himself. He is shot by Godfrey shortly thereafter.

After being "saved" by Godfrey: