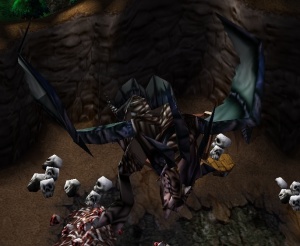 Searinox was a rogue black dragon who, just prior to the demonic second invasion of the Burning Legion, scoured the uninhabited lands south of Strahnbrad, where he had been feasting on the local farmsteads and their inhabitants for weeks.

Searinox and his brood of whelps came to the knowledge of Feranor Steeltoe and his band of dwarven Dragon Hunters; they wanted to claim the heart of the gargantuan beast. The heart of a black dragon could bestow fiery enchantments upon weapons, and they wanted those enchantments.[1]

With the help of prince Arthas Menethil, Feranor and the hunters managed to storm Searinox's lair, littered with the hundreds of corpses that he feasted on. Despite Searinox's best efforts, he, his whelps, and the undead he summoned were defeated and his rampage was put to an end. Steeltoe reforged the heart into a magical orb, which he gave to Arthas.[2]