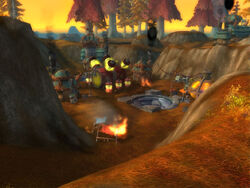 Secret Lab from the outside

The Secret Lab is a small lab located within a crater like hole in southern Azshara. It houses a few experiments that the Bilgewater goblins have been performing, most notably on raptors. They, like the goblins at Area 52, have built a working rocket to space.

X. Nizzlebex is the director of the Secret Lab, but something appears to have gone terribly wrong. All the buildings are on fire, and the buzzer to request assistance indicates no one is home. Research Interns can be found running around attempting to extinguish themselves. Meanwhile, Subject Four, apparently an escaped experiment, seeks to exact revenge on humanoids, while Subject Nine attempts to formulate an escape plan.