Ahead of us is the main thrust of the yaungol army.

Here, they prepare their vast army to attack the villages of Kun-Lai.

If we strike at the Osul now, we can cut them at their very core.

Remember, for every of their number that we strike down here, we save one of our own back at home.

That should put a serious dent in their numbers.

I doubt they will be able to recover from such losses.

[89] Ranger Rescue before heading out. Before going too far, Katak the Defeated just to the north down the hill also offers

Start killing Marauders for Seeing Red and Ranger Rescue. Use the Stone Keys the Marauders drop to open Drywood Cages, which contain Longying Rangers. They will join the party once freed. Use the quest item on Osul Ballista to destroy them, not regular attacks. The three named do count for Seeing Red, so take advantage of that. Battat is just to the west, Urang is just to the northwest of Battat, and Ku-Tong is on the north side of the big field, all in big tents. 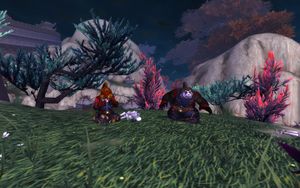 Suna and Ban after Ranger Rescue

Lin, unfotunately, did not make it. His corpse can be found just south of Ku-Tong's position, north of the big field. Finish up and turn in.