Find Coren Direbrew in the Grim Guzzler within Blackrock Depths.

This scrap of paper seems to have been left behind accidentally by the Dark Iron invaders.

While the plans are complicated and written in some form of coded Dwarvish, the signature at the end - "Coren Direbrew" - is clear enough, as is mention of the Grim Guzzler deep within Blackrock Depths. You should seek out the instigator and put an end to these raids.

It's a damn shame, it is, you lot cavorting up there without drinking the finest of the fine brews - ours! Did we get an invite to the competition? Of course not. Ya fight in some war and suddenly yer beer's not good enough! So aye, we smashed up yer kegs a bit, and rightly so!

Er... seeing as you've smashed through our defenses and all, though, maybe ya can do something fer me... 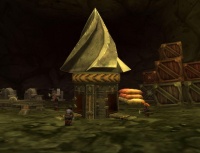 Once you got close to Coren Direbrew, he yelled out "They've sent muscle to get revenge! Scatter!", at which point he and three Dark Iron Antagonists ran away. Coren ran to the back room where Lokhtos Darkbargainer is.

Since the Dark Iron Dwarf attacks were temporarily disabled, it is no longer possible to pick up this quest, as the paper is no longer left behind. For those who already have this quest, Coren Direbrew still spawns in BRD's Grim Guzzler, allowing you to complete the quest and pick up

However, there currently seems to be a bug where Coren Direbrew will occasionally not spawn. Checking to see if the dwarves are working on a digger, just to the right of the instance entrance will tell you if he's spawned. Resetting the instance seems to correct the problem.