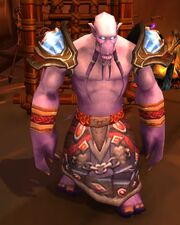 Seer Olum in World of Warcraft.

Seer Olum is a level 70 Broken located in Serpentshrine Cavern, located in the room with Fathom-Lord Karathress. He is a member of the Ashtongue Deathsworn and was one of the closest allies of Akama.[1]

Olum is one of the keepers of the Ashtongue's secret - their intent to overthrow Illidan. However, he has been captured by Lady Vashj's naga and is being tortured to try to ascertain exactly how the Ashtongue plan on deposing the Betrayer.

He begins the quest

[70] The Secret Compromised, but only if you have completed

[70] Akama's Promise. Note that he "despawns," within an hour after Fathom-Lord Karathress is defeated.