An unnamed Horde gunship took part in the battle for the Seething Shore. The vessel, under the command of High Warlord Volrath, was sent to the small island with a force of champions to recover the newly-formed Azerite deposits present. During this mission, the gunship clashed with Alliance forces based from their own gunship seeking the same resource. Nathanos Blightcaller would oversee the Horde's collection efforts from above. 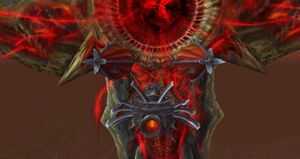 It later went to the Wound in Silithus and carried the artifact bearers and Magni Bronzebeard to destabilize the Sword of Sargeras.