Sef Iwen is a Drust ghost located in Drustvar. She was once a druid member of the Thornspeakers. 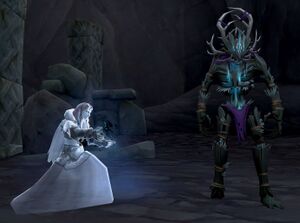 Iwen's ghost and the golem.

Iwen was alive at the time of the arrival of Gilnean settlers that would eventually come to form the nation of Kul Tiras. Threatened by them, Gorak Tul ordered the Drust to initiate raids and attacks upon the humans that had come to Kul Tiras, though Sef spoke out against it, believing it to be unnecessary and that the Drust and Humanity could live in harmony. Given an ultimatum, to attack the humans or to live in the woods forever, Sef chose the latter; believing Tul simply meant to exile her. Instead, she was murdered by Gorak Tul and her soul torn from her body then shackled to the remains; forcing her to live as a spirit forever in the woods that would eventually become the Glenbrook Hunting Grounds, her death meant as an example to those who would seek to work with the humans.[1] This, amongst the other atrocities that Gorak Tul would commit against the humans, eventually led to Sef's fellow Thornspeakers rebelling against Gorak Tul and aiding the humans.

Sef remained as a spirit until the arrival of an adventurer who was skilled in the art of enchanting. Having heard her whispers upon the wind, the adventurer trekked into Drustvar and met with Sef's disembodied spirit. Telling them that she wished to walk amongst the living once again, though was unwilling to possess a living creature as the other Drust had been doing, she wished for the enchanter to help her create a golem with which to animate. With this done, she could guard the forests of Drustvar once again and keep the innocent safe from harm. After having her remains cleansed and destroyed by the enchanter and the various pieces required for her new body collected; Sef Iwen sent the enchanter to power a soul core with the spirits of the vengeful Drust who haunted Gol Koval. Powering up an old Drust shrine within Gol Koval that took the two to her abandoned sanctum in the mountains, Sef, unfortunately, realized too late that the souls she had trapped were more powerful than anticipated. Rather than be used as fuel for her new body's soul core, the souls managed to animate the golem and attempted to take vengeance upon Iwen and the enchanter; forcing the latter to destroy the golem before Sef was consumed. With her new body destroyed, Sef briefly mentioned the idea of trying again, though took the failure as a sign that she was meant to move on. Gifting the enchanter who had aided her with her knowledge, Sef's spirit passed on to the afterlife in peace.

This section contains information that needs to be cleaned up. Reason: Convert into quest notes links / add context.