Sen'jin (or Sen'Jin)[2][3] was the aged chieftain of the Darkspear tribe. A powerful witch doctor, he was a spiritual leader for his people as well.[1] When Thrall and the orcish Horde arrived on the Darkspears' island home prior to the Third War, Sen'jin allied with them against the forces threatening his people but was ultimately killed by murlocs. The Darkspears subsequently joined the Horde under the leadership of Sen'jin's son Vol'jin. 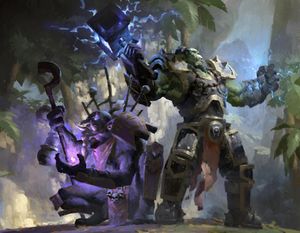 For years, Sen'jin led the Darkspear tribe in peace on the remote Darkspear Islands. He dreamed of creating a home for the Darkspears where they could thrive and live free from fear[4][5] and his vision for trolls was for them to return to being a people led by a shadow hunter as they had been in the distant past.[6] He looked at other trolls and saw the folly in their desires to conquer the world and recreate their ancient empires, and he realized that conquest was not the only path to achieving a sense of freedom.[5][7] While he maintained great respect for troll traditions and encouraged his son Vol'jin to become a shadow hunter, he did so by looking forward and always stressing lessons in leadership rather than traditions to copy blindly.[7] Sen'jin also personally encouraged Vol'jin's best friend Zalazane to become a witch doctor, leading some Darkspears to believe that Zalazane was being trained to lead after Sen'jin while Vol'jin was destined for greater things, even though both youths believed in Sen'jin's dream of a Darkspear homeland.[4]

Shortly before the Third War, new troubles began on the Darkspear Islands. A human expedition of Kul'Tiras Marines followed the Horde escaping from Lordaeron and arrived on one of the islands where they established a settlement, pushing the trolls further into the island.[2] Meanwhile, the once-docile murlocs had become fevered, prodded by the Sea Witch Zar'jira that lived in the ocean, who they offered sacrifices to.[3] One night[8] shortly after these attacks began,[1] Sen'jin experienced a powerful vision in which he saw a young orc far seer who would save his people and lead them from the islands.[1][3] Sen'jin subsequently told Vol'jin that he had to immediately enter the jungle of First Home to be tested by the loa. The judgment was normally reserved for older trolls, but Sen'jin insisted that there was no time. As Vol'jin and Zalazane departed for First Home, Sen'jin looked at his son like he was never going to see him again.[8]

Sen'jin's vision soon came true when Thrall and his orcs were forced to moor on the Darkspear Islands after the Maelstrom nearly destroyed their ships. Sen'jin approached the orcs, warning them of the humans nearby. Thrall promised to force the humans from his island. After defeating the humans' leader—an archmage—and forcing them into a retreat, they were suddenly attacked by Zar'jira's murloc minions. The murlocs captured Sen'jin's trolls, the witch doctor himself, Thrall, some of the orcs, and the remaining humans and imprisoned them in the caverns below the islands.[2]

Thrall managed to escape the prison and rescued many orcs and trolls, but a murloc sorcerer took Sen'jin into the deepest part of the underground lair, where he brutally attacked him and sacrificed him to the Sea Witch just as Thrall arrived. Thrall battled through the murlocs and finally destroyed the murloc sorcerer, but Sen'jin's wounds were deep and he was dying. With his last breath, the witch doctor implored Thrall to take his people from the islands and save them from destruction.[3]

Following Vol'jin's near death at the hands of Warchief Garrosh Hellscream's assassins, Sen'jin appeared before his son alongside Bwonsamdi, the loa of the dead, who stated that Vol'jin should be giving himself to his care instead of clinging to life. After a brief exchange, Sen'jin convinced Bwonsamdi that Vol'jin might have many reasons to remain alive and that it should suffice for the loa that at least one would be serving Bwonsamdi's purposes. Sen'jin's spirit subsequently faded from view, but he assured Vol'jin that he would always be with him as long as he remained true to himself.[9]

After Vol'jin escaped from the Isle of Thunder and prepared to die with the rest of the Thirty-three to defend Shado-Pan Monastery from the Zandalari, he reached out to the loa whereupon his father was the first to appear before him. Sen'jin expressed his pride in his son and remarked that Vol'jin had transcended being his son when he became a shadow hunter. After granting Vol'jin a vision of the history of troll civilization and discussing the nature of what it meant to be a troll, Sen'jin stated his belief that the future of trollkind was in Vol'jin's hands.[6]

In honor of Sen'jin's memory, the Darkspear settlement in Durotar is called Sen'jin Village.

The Darkspear trolls of the Argent Tournament, much like how the orcs represent Orgrimmar, represent Sen'jin or perhaps more likely Sen'jin Village in the tournament.

The Alliance & Horde Compendium states that after Thrall saved the Darkspear tribe from certain annihilation, the tribe's shaman leader pledged their loyalty to the Horde forever.[10] However, it's not stated if this refers to Sen'jin or Vol'jin. 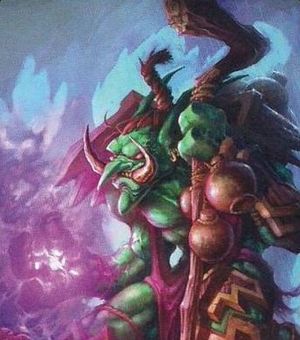 Sen'jin is classified as a Horde priest.[11]

The Judgment implies that Sen'jin ascended to the loa after his death. The last loa Vol'jin saw before leaving First Home appeared stronger and newer than the others and had a familiarity to it that he couldn't place. When Vol'jin and Zalazane returned to the Darkspear village, Vol'jin quickly realized that Sen'jin had been killed and that his father was "no longer among the Darkspears. At least, not as a troll."[8] Sen'jin's numerous appearances to Vol'jin alongside Bwonsamdi in Shadows of the Horde lend evidence to this theory, but it is also worth noting that Bwonsamdi watches over the spirits of departed Darkspear trolls.