Sen'jin Village is a settlement of the Darkspear tribe located on the southern coast of Durotar.

After the jungle trolls of the Darkspear tribe were forced to flee the Echo Isles because of Zalazane, Vol'jin relocated his people to the southern coast of Durotar. Vol'jin named the fishing village after his father and former master Sen'jin,[1] who fell while saving his people from rampaging murlocs long ago, during the Third War.

The village became the main stage for Zalazane's Fall and slightly expanded after the Cataclysm. During the events of Escalation, it once more became the main stand of the Darkspear Rebellion. Because of this, the village was attacked by Kor'kron army but the attack was successfully repelled by Vol'jin, Thrall, Chen Stormstout and the adventurers. Right after this, the new center for the rebellion became the newly retaken Razor Hill.

Usually the first settlement most orcs and trolls encounter on their adventures after around level 5. The road from the Valley of Trials leads east to a crossroads. The path to Sen'jin heads southeast, while the other path turns north toward Razor Hill.

Most of the inhabitants here seem to be alchemists and herbalists. These are the only two professions trained here. 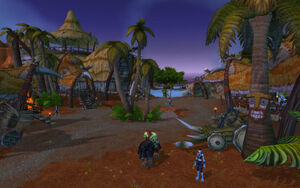 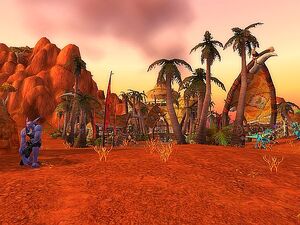 Sen'jin Village is where most of the Darkspear tribe relocated after Zalazane drove them out of the Echo Isles. The trolls here practice more peaceful shamanism, and are trying to fight their way back to reclaiming their island home.[2]