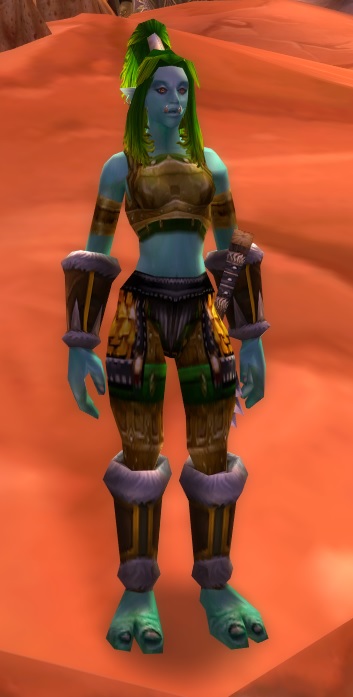 Senior Sergeant Kai'jin is a jungle troll located at The Scarab Dais in Silithus alongside Warlord Gorchuk during the Call of the Scarab micro-holiday. Kai'jin, along with her Alliance counterpart Master Sergeant Fizzlebolt, is a callback to the massive server-wide gathering quest needed to open the Gates of Ahn'Qiraj. Thankfully, rather than every kind of tradeskill reagent, Kai'jin only is looking for meat.

Part of de tradition involves summonin' de colossal insects from de three silithid hives. To do that, we need meat. Heaps a meat.

She was a level 60 quest giver located in the Valley of Strength in the orcish city of Orgrimmar.