For other uses, see Sentinel (disambiguation). 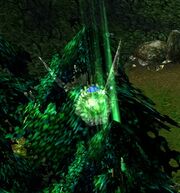 Sentinel is an ability that enables an huntress to see through the eyes of her owl familiar, allowing her to spy on enemy positions. The owl will perch at a tree permanently, unless the tree is destroyed.[1]

[Sentinel] is a hunter talent. The

[Sentinel's Companion] is a reward from

A sentinel, elven ranger, or huntress can create a visible, magical sensor in the form of a bird. The caster chooses the bird’s form (owl or otherwise), but it is always diminutive in size. This spell must target a tree. The bird-shaped sensor appears on the tree and remains stationary where it is cast, though it can move its head. The caster concentrates on the sentinel to see through the bird’s eyes and hear through its ears from any distance. The bird sees and hears exactly what caster would see and hear if he were present. A caster must concentrate to use a sentinel. If he does not concentrate, the bird remains motionless until he resumes concentrating. A destroyed sentinel is dispelled. A creature that spots a sentinel may notice that the bird seems artificial.[2]