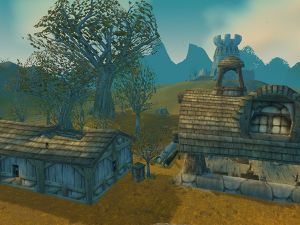 Sentinel Hill is an Alliance settlement located in eastern Westfall. After the Cataclysm and the return of Gryan Stoutmantle and the Westfall Brigade from the war in Northrend, the area was reinforced with sturdy walls. King Varian Wrynn sent supplies, troops, and siege engines in hopes of rebuilding the former breadbasket of the kingdom and to house the citizens of Stormwind whose homes were destroyed. From Sentinel Hill, the Brigade has been able to reclaim much of the lands, such as Moonbrook, the Furlbrow's Pumpkin Farm, and the Jansen Stead. The stronghold isn't finished yet, and cannot let the homeless that surround it in yet.

It has a flight path (gryphon roost), barracks-like inn, mailbox, forge, anvil, multiple cottages, and lumber mill down the hill from Sentinel Tower. 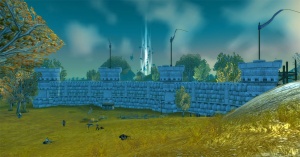 The Raging Chasm as seen from inside the walls of Sentinel Hill. 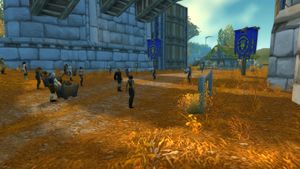 A sign currently reads "ABSOLUTELY NO TRANSIENTS! NO EXCEPTIONS!" 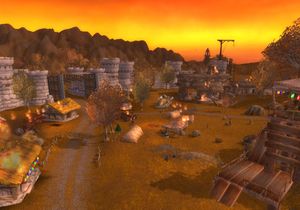 Sentinel Hill after the quest

When the player first arrives, the area appears to be under construction and is under constant attack from the Riverpaw gnolls. Low-level players should be mindful of this and not wander off should gnolls spawn on top of you. At the gate, assorted refugees are held in check by guards and will occasionally throw garbage at them and say things like, "This is poop!"

[15] Rise of the Brotherhood, Hope Saldean is revealed to be Vanessa VanCleef, daughter of Edwin VanCleef and leader of the reformed Defias Brotherhood. She leads a sneak attack against Sentinel Hill. From there on, the town burns and is constantly attacked by the Defias instead of the gnolls, leaving only one building usable, Sentinel Tower. The various trainers and vendors are crammed inside the tower and the guard NPCs stand alert near the flight master.

Sentinel Hill is a sad garrison that houses the 300 remaining soldiers who attempt to keep the peace in the whole of Westfall. That is their intent, but about all they concentrate on is catching Defias Brotherhood members heading to the main road to attack Alliance villages.

The soldiers inside are despondent and harried, for their job is difficult and the Alliance claims it has no more resources for them. They welcome aid from anyone who offers but regret that they cannot pay mercenaries. Thus, they receive little assistance. They try to protect the farmers in Westfall, but the free farms are spaced throughout the land and guarding the safety of them all is difficult.[1]