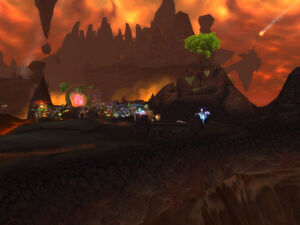 Phase 3 with only Shadow Wardens recruited 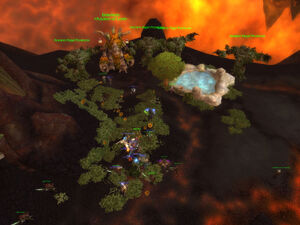 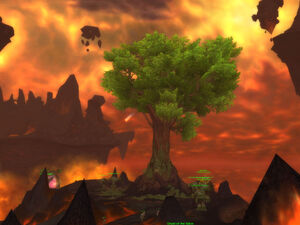 It is wood. It is in the Firelands. Why is it not on fire? RAGNAROS INFURIATED!

The Sentinel Tree is a magical tree with roots in Azeroth but a canopy in the Molten Front's daily quests section of the Firelands, where it provides much needed protection to the Guardians of Hyjal as they mount their counterattack to the Firelands Invasion.

[85] Through the Gates of Hell. As the player spends Marks of the World Tree to recruit more factions to aid in the Firelands Invasion, the Sentinel Tree will grow through the various phases from a tiny sapling to a large tree whose roots enfold the original cave. At the same time, the area surrounding the tree will transforms from a black pumice wasteland to a slightly more inviting expanse of patchy green undergrowth. Much of the greenery and scenery is linked to specific phase vendors and guardian NPCs, such as Varlan Highbough and Ayla Shadowstorm, or the Shadow Wardens and Druids of the Talon.

What can you tell me about the Sentinel Tree, general?

Not much, I'm afraid. I'm no druid. I'm here to lead troops. Seems odd to me that Malfurion tried to plant a tree in the middle of a warzone, but... like I said, I'm no druid.

However, I can tell you this. NOTHING makes those fire elementals angrier than the idea of a big leafy tree growing right in the middle of their homeland. If nothing else, when this tree grows to its full size, it will be a beacon of hope for our forces... and a thorn in the side of our enemy.

What are we building here?

We are building a permanent outpost here in the Firelands, <name>. Even if Ragnaros is defeated, another may someday take his place. We cannot allow what happened in the Burning Steppes and Mount Hyjal to threaten our world again.
To that end, we will grow the Sentinel Tree. A tree with roots in Azeroth, but a protective canopy growing here in this terrible realm. Under its shelter, we will permanently station a group of druids to maintain an eternal vigil over this desolate world.