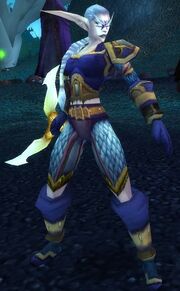 Sentinel spies were sent to Quel'Thalas by the night elves in order to spy on the activities of the blood elves and sabotage them.[1] They were aided by the dwarf Prospector Anvilward. Most of their activities took place in the Ghostlands, where they built a headquarter and camps, but also in the Eversong Woods.

The night elves arrived by ship and took over Shalandis Isle, where they set up bases on the three ley line nexi of An'telas, An'owyn, and An'daroth, which served as their main base.[2] All three possessed a moon crystal orb at their center, controlled by a

[Crystal Controlling Orb], which they used as scrying devices to spy on the blood elves.[3]

A few night elves forces could also be found in Eversong Woods. Around the West Sanctum, Darnassian Scouts were working together with the dwarf Prospector Anvilward who, playing the role of an envoy of Ironforge,[4] befriended the blood elves, notably Ley-Keeper Caidanis. He gathered information such as detailed maps of different strategic buildings in Eversong Woods or a diagram of an arcane sanctum sketched in good detail, accompanied with numerous notes, and delivered the secret documents to the night elves, who sabotaged a sanctum.[5]

After Prospector Anvilward's duplicitous role was discovered by the blood elves, open hostilities began between the two factions. The rogue Keltus Darkleaf went spying on them and sent his companion, Whisper, to strike at them but the bat was killed immediately.[6] The plans for most of their actions were found by the sin'dorei at Shalandis, while the Sentinel Leader was neutralized at An'daroth. An'telas was attacked by forces of Tranquillien led by Magister Sylastor, and was successfully overrun by the blood elves. Two Night Elf Ambushers tried to get the plans back, in vain.[7]

Despite the activities of the Sentinel Spies, Malfurion Stormrage told Lorash Sunbeam that the kaldorei never attacked Quel'Thalas in A Good War.[8] However, instead of this being a retcon, the author of the novella Robert Brooks acknowledged this as a mistake on his part and that he simply forgot about the quests involving the Sentinel spies until a long time after the novella manuscripts had already been locked.[9]

The exact reason for the night elves spying on the blood elves before they even joined the Horde is rather unclear, considering the help the two people gave to each other during the events of the ascension of the Lich King. Since Tyrande Whisperwind was shown as having no qualms with the blood elves, it is possible this expedition was sent by Fandral Staghelm.