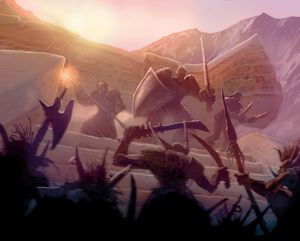 Sergeant Bly is a level 45 elite human found in Zul'Farrak along his party. Bly is friendly and assists during the Pyramid battle, but becomes hostile when questioned about the Divino-matic Rod.

Help! My band and I have been captured by trolls, and they're going to sacrifice us!

Get us out of here and I'll give you anything you want.

We don't have time to talk! We have to think about those trolls!

Thanks a lot, <name>. We couldn't have made it without you. Oh, and if I had mentioned before something about repaying you for saving us, well... you can forget it!

That's it! I'm tired of helping you out. It's time we settled things on the battlefield!

After all we've been through? Well, I didn't like you anyway!!