Sergeant Gorrok is an orc quest giver that takes part in multiple Horde quests in the Jade Forest. He is also a mining trainer.

He is turned into a jade statue by the jade witch, but is saved after she dies. Before the battle at the Serpent's Heart, he can be seen sleeping in a house in Grookin Hill, likely recovering from his wounds. However, he is not seen after the battle. 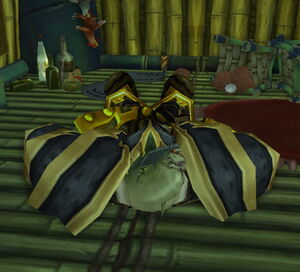 Sergeant Gorrok resting before the battle.

Into the Mists (Mist of Pandaria In-Game Cinematic)