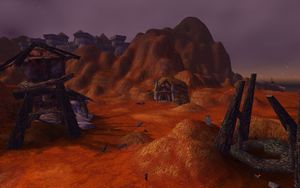 When the Iron Horde began their invasion, they took control of the cave.