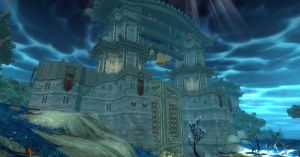 The Gate of the Setting Sun

The Serpent's Spine (or the Pandaren Wall) is the great wall that separates the mantid territories - the Townlong Steppes and the Dread Wastes - from the Pandaren Empire. The wall is guarded by many Shado-Pan wallwatchers and has several garrisons.

As Lei Shen, the first emperor of the mogu, began to unify his people under a single banner and subjugate the other races of Pandaria, he knew that the mantid would never bow to his authority. He commanded his slaves to construct the Serpent's Spine, a magnificent wall that spanned the length of the empire. It took many generations to build but Lei Shen knew that fear would motivate his subjects. Though the construction of the wall was delayed by decades through the merciless slaughter of the workers and farmers by Ka'roz the Locust, the fear of the mantid moved mountains, raised armies, secured Lei Shen's empire, and built his wall.[1]

Warlord Gurthan acted as the leader of the mogu defenses on the Serpent's Spine while the saurok Nysis was among the defenders.[2]

The cruel Emperor Lao-Fe of the mogu empire had a favored punishment among pandaren slaves - to separate families. Slaves who displeased him would have their children sent to the Serpent's Spine, to suffer and die as fodder for the mantid swarms. Such fate befell to a pandaren brewmaster named Kang. The mogu emperor sent Sheilun to the Serpent's Spine while Sheilun's mother died trying to stop this. This event sparked the beginning of the rise of the pandaren monks and subsequent Pandaren Revolution.[3][4]

After the rebellion, Xuen warned the first pandaren monks that, although they were free, they had inherited the responsibility to protect Pandaria from the evil minds that wished to claim it. Every one hundred years, the mantid would swarm the land. All that stood in their way were the brave souls who would fight atop the Serpent's Spine. The monks who remained in Kun-Lai dedicated themselves to preparing for this threat. And every one hundred years, pandaren monks lined the top of the Serpent's Spine to face the overwhelming waves of mantid and risk their lives to protect their land. Xuen would always allow one mistweaver to carry Kang's staff Sheilun into this centennial battle, and many lives were saved by those who carried this staff. although many of its bearers also died in service to Pandaria. But their sacrifices were not in vain as the wall stood.[5]

Years after the rebellion, Zandalari trolls invaded the lands of Pandaria, taking Kun-Lai and the Jade Forest. The only real fighting force of the Pandaren Empire was an order of monks, charged by the pandaren emperor to patrol Serpent's Spine and stand against the mantid swarm. Though the monks raced from the Serpent's Spine to defend their lands against the trolls, they quickly found themselves outnumbered and outmaneuvered by the Zandalari's pterrorwings and bats.[6]

Many years later, the role of protectors of Pandaria and the Serpent's Wall fell to the Shado-Pan.

In the Valley of the Four Winds, the mantid breached the wall, but the newly-arrived Horde and Alliance forces assisted the pandaren in fending off the mantid.[7]

Recently, the mantid and the yaungol have laid siege to the wall, in an effort to break through to launch an assault on the lands east of the wall. The mantid have managed to damage the wall at the border with the Valley of the Four Winds and started to unleash their deadly assault upon the land, mainly at Stoneplow. The yaungol have made it past the Ox Gate and have started to settle in Kun-Lai Summit.

In the Townlong Steppes, the recently formed Dusklight Bridge allowed the mantid to move into action, avoiding the Widening Deep.

Li Li Stormstout was brought here by Messenger Fishtail to meet Min of the Shado-Pan. He escorted the pandaren girl to a guard tower where Chen Stormstout was supposed to meet them. However, her uncle and the tower's guards weren't there. Suddenly, a group of mantid ambushed them, and Min helped her climb down the wall.[8]

During the Assault in the Vale of Eternal Blossoms, the Zara'thik mantid took control of the Serpent's Wall main gate.

The wall runs from Pandaria's southern coast in the Krasarang Wilds, bordering the western Valley of the Four Winds and the Vale of Eternal Blossoms, and ends in Kun-Lai Summit.

There are few notable settlements upon the wall:

Gate of the Setting Sun units