Servants of a Dead God 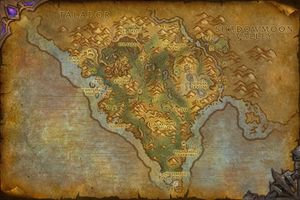 Arakkoa are cast from the sky by their own brothers and sisters, only to crawl from the sludge as twisted, flightless wretches.

Even in death, Sethe exerts influence over the pitiful creatures who succumb to his curse. The Sethekk cult was born of this influence, created by a false king in service of the dead god.

Silence their prophets, for they seek a future of black seas and blighted skies. Defeat their chosen champions, for they have pledged themselves to a lie.

Weapons and zealotry do not make one strong.

They turned to Sethe because they were too weak to face death.

[96] The False Talon King before heading out.

Back to the northeast. Start killing arakkoa and look for big ~10-yard diameter ritual circles on the ground. Run over them repeatedly until they're stomped out. Just uphill from the southern ritual circle is Talon King Ikiss. He has the same area of effect move now that his Outland version in Auchindoun did, though this version won't one-shot at-level players. Still, kite him around the central pillar and do break line-of-sight when he's about to finish the cast. Once Ikiss is dead, interact with the Heavy Bangle on the altar to pick up

[96] Lithic's Gift. Hold on to that quest for now and finish up these first.

Head north to stomp out the central and northern ritual circles as well.

Turn in northeast of Talon Watch, due east of where Kalos the Bloodbathed is in Sethekk Hollow.