This realm is connected to the realms: Skullcrusher US, Gul'dan US 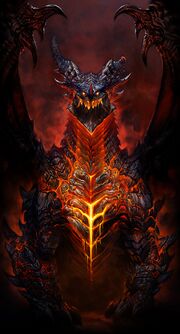 Deathwing the Destroyer, leader of the Black Dragonflight

Onyxia, broodmother of the Black Dragonflight

Black Dragonflight is a US PvP server launched April 11, 2006. Although it is generally listed as a "medium population" server, it has the largest population of North American realms with both an actual server location and realm time based in US Eastern Time. The realm is very highly rated in various rankings despite this medium population, and despite having been founded nearly two years after launch. Thus, Black Dragonflight is thought to have a high quality and highly skilled playerbase relative to most other realms in both PvE and PvP.

As of late August 2010, the realm is ranked #16 out of 241 North American realms in raid progression[1]. At this time, it is the #1 rated realm with a raiding population of less than 9,500 characters. It is also the #1 rated realm founded in 2006 or later. In addition, the quality of PvP play has vastly improved over the past few years, and it is now common to see Black Dragonflight teams competing near the top of the Stormstrike battlegroup Arena rankings.

The realm is named after the Black Dragonflight, the dragon brood of Cataclysm star Deathwing and his daughter Onyxia. Despite high achieving guilds on both sides, the Horde outnumbers the Alliance on Black Dragonflight in roughly a 3:2 ratio. This may change with the anticipated popularity of the Worgen race on Alliance in Cataclysm, which may bring more balance to the population. As it is, the realm's population is still more evenly distributed than most other PvP realms in the battlegroup, such as the notoriously lopsided Mal'Ganis realm.

Black Dragonflight features a strongly dedicated community in which many players of the realm will show up to Blizzcon, despite BDF being a predominantly east coast server and Blizzcon taking place in Anaheim, California. Often, Black Dragonflight players will meet one another in person at this event.

The Black Dragonflight, in all its glory

Black Dragonflight has been online since April 2006. Rare for new realms before the advent of paid server transfers, it came online as closed to brand new players and open only to transfers from other realms. Many jumped at the chance to establish a new home, as it was at the time impossible to do so any other way. As a result of so many experienced players joining so quickly, the Gates of Ahn'Qiraj were opened nearly immediately and with much less fanfare than on other realms.

The guild <Overrated> was the first guild to clear all of Naxxramas. It also scored the World First kill of C'Thun in AQ40, but unfortunately this success was aided by an exploit where they hacked the gates to his chamber. The guild was permanently banned in October 2006.

<Forgotten Heroes> transferred their guild from Burning Blade at TBC launch. On their previous realm they had scored numerous realm firsts, including the first kill of Onyxia. Now simply <FH>, after the transfer they hit The Burning Crusade running and were regularly ranked in the top 50 of North American guilds throughout the expansion.

<FH> brought back Black Dragonflight's "Vanilla" tradition of world-first kills by scoring World Firsts in Icecrown Citadel, specifically being the first guild worldwide to down 25-man Lord Marrowgar and Lady Deathwhisper on December 8, 2009. They followed up by scoring the World First kill of the Blood Prince Council on January 19, 2010. Previous to this, they were the 4th guild in North America to complete

Alliance has its share of top raiding guilds, and as one example <TBA> was consistently ranked in the top 200 of North American guilds throughout Wrath. This expansion also brought the dawn of a competitive PvP age to BDF, and there are now several examples of the first Gladiator teams on both factions. Dozens of teams are now rated highly enough for T2 weapons in 3v3, and quite a few in 5v5 as well.

When WOW Progress unveiled its individual Gearscore rankings in late August 2010, it was revealed that the paladin Boozelage of the Black Dragonflight realm was alone with the highest GS in the entire world, at 6923.

The Horde has a higher population than the Alliance on Black Dragonflight. Despite the difference not being as large as some other PvP servers, the difference is there. Due to the nature of Wintergrasp favoring the more heavily populated side, the Horde generally wins about 80% of Wintergrasp battles on the realm[2].