This realm is connected to the realm Shadow Council US 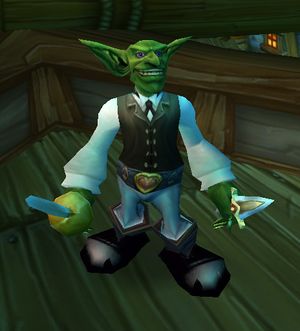 The Blackwater Raiders for which the realm is named are the group of pirates led by Baron Revilgaz in Booty Bay.

Blackwater Raiders was brought online in October 2006 and currently maintains a population of over six thousand players. Alliance players outnumber Horde players 2:1. The server maintains US Pacific Time, or UTC -8:00 (-7:00 during Daylight Savings). Updated lists of the Alliance, Horde and the specific listing of Roleplay Guilds are maintained on the World of Warcraft Community Site and updated frequently.

Guilds advertise on the WoW forums and within inter-city Trade chat according to their primary goal - Player Versus Player (PvP), Player Versus Environment (PvE) or Roleplay (RP). Currently Blackwater Raiders is regarded as having poor overall quality concerning PvE progression, PvP, and even RP. The community, however, tends to be very warm and welcoming due to the smaller size and more prominent members. Newcomers are advised to enlist within a guild of their choice for personal progression.

With peak player populations of less than two thousand in the evenings, there has not been a queue to log into the server since the launch of Wrath of the Lich King. Because of the confusion encountered after launch, many players joined to locate friends already playing on the server, but had little if any interest in roleplay. The roleplaying atmosphere tends to be very low as a result, though all players remain respectful of roleplayers.

Roleplay in major cities and across the realm can be easy to find--with some larger guilds developing exhaustive histories and lore. For the best roleplaying experience, newcomers are advised to ask around for the active and larger roleplaying guilds and to apply to them.

The low community numbers also help to cut down on trolling, ninja looters, and "god-modding" roleplayers. Players that do so as well as the guilds that encourage such activity tend to be quickly identified and blacklisted. Troublemakers rarely last long on Blackwater Raiders and are quickly moved or forced onto larger servers such as Moon Guard or Wyrmrest Accord.

The server economy is very healthy, with prices for high demand items tending toward the higher end, especially end level items. Demand for items of all level is generally healthy on both sides, and many players advertise crafting skills for provided materials. Since Cataclysm, however, brought easier-to-obtain Bind-to-Account gear, low-level armor do not sell as well or as fast due to the low server population and prevalence of niche, high-level guilds. The materials to make them still sell quickly and at high prices.

General raid progression information can be found both on the official realm forums and Blackwater Raiders Guild Progression. Currently guild progression rankings are based on the three factors reported from the World of Warcraft Community Site: boss kills, loot awarded and achievements received. The most readily available ranking system is available from GuildOx.com.

Guilds of the Blackwater Raiders