Blade's Edge is a PvE Server. This server went live on July 9, 2008. The AQ opening event took place on September 20, 2008. Xed was able to earn the title of Scarab Lord.

The server is named after the zone Blade's Edge Mountains introduced in the first expansion of World of Warcraft: The Burning Crusade. But the appearance of the zone does not fit the people of this realm. We have build a great community in the past months. We did have our ups and down, and many people said we would fall, but we didn't. The number of people populating the server has grown bigger, in favour of the Alliance. So if you like to reroll or transfer here consider doing that on the Horde side. 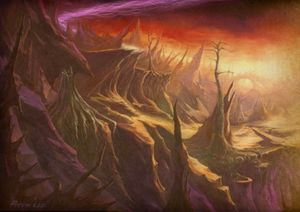 Please report your progression in the following threads: