Darkmoon Faire was opened on Monday, 4th September 2006, together with the PvE realm Darkspear. Realm time is the same as the Central European Timezone, or UTC+1 (UTC+2 during Daylight Savings Time).

Darkmoon Faire is one of six of the European roleplaying realms available in english together with Argent Dawn, Earthen Ring, Moonglade, The Sha'tar and Steamwheedle Cartel. 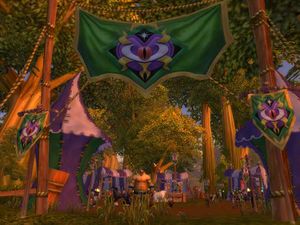 The Darkmoon Faire in Elwynn Forest

The Origin of the Realm Name

A gathering of the exotic from around the world and beyond, Silas Darkmoon has brought together the Darkmoon Faire as a celebration of the wondrous and mysterious found in Azeroth. While the Faire spends most of its time in parts unknown, they do stop from time to time in Mulgore, Elwynn Forest and Terokkar Forest. When the Faire is on its way, barkers will stop by Orgrimmar and Ironforge to announce its arrival.

As a roleplaying realm, Darkmoon Faire is subject the rules outlined in the Role Playing Policy in addition to the regular In-Game Policies and Naming Policy. Summarised, players should:

Since it's inception, Darkmoon faire has predominantly been home to Alliance players. However, more recently there has been a good, steady influx of Horde side players, allowing for succesful RP opportunities for both factions.

Public roleplaying seems to be scarce, since the majority of roleplayers prefer to do this in-guild or via events.

For Alliance players it is not recommended to roleplay in Goldshire, the constant duelling and yelling makes roleplaying difficult.

Horde roleplayers tend to meet in Brill and Silvermoon.

A player who desires to increase his/her roleplay experience and has a computer which can handle a couple of addons is advised to install a roleplay-addon such as MyRolePlay or FlagRSP2. This enables you to detect fellow roleplayers and their status.

Darkmoon Faire has several guilds and raidgroups in both alliances who are busy with endgame content.

Darkmoon Faire was originally one of the servers which made up the Nightfall Battlegroup, but was transferred to the Cruelty/Crueldad Battlegroup - one of the first cross-language battlegroups - on May 27 2009.

The current inhabitants of Darkmoon Faire work hard to keep the community filled with great role play as well as pushing into PvE content. They have many societies and guilds who add to the diversity of the realm.

Although people joining this realm are advised clearly about the fact that it is Roleplay, a newcomer will notice that a good lot of players do not respect the Naming policy. The higher level a player with a non-RP name is, the higher the chance a Game Master might ask you for a change. Therefor it's important to notify Blizzard-staff on such names.

Utopia is a channel used by alliance players to survey and coordinate old school raid since no guilds really have the time to only do this, it's up to a good bunch of player to organize them. With the new Achievement System, it is a fairly good way to try to talk to a good lot of guild representatives.