Darkspear is a realm often prone to controversy (on the forums) that has led to it being nicknamed 'Dramaspear'. The forums are well populated and usually have a few interesting threads. Darkspear has become a realm that has a lot of interesting characters and where Orgrimmar, Ironforge and Stormwind have become a place of laughter and fun, with the favorite gathering places for both factions being outside the bank and auction house. Although in the past Alliance outnumbered the Horde greatly, the ratio has recently fallen to around 1:1. Still, the Horde put up a good fight and generally dominate organized PvP, such as Battlegrounds, though Alliance tend to have an advantage in World PvP such as Wintergrasp and City Raids, due to their larger numbers. Horde and Alliance seem to cope very well and tend to meet each other in Orgrimmar, Ironforge, etc without killing each other.

PvE progression on the realm advances steadily, primarily with Riot, Gwardia Polska and Cookie on Alliance, with Club Drama and Clarity on Horde. However the other guilds continue to progress in their wake and Darkspear has a healthy raiding community. The oldest guild on Darkspear is Alliance guild Cookie, which was created just a week after the realm was opened.

Ahn'Qiraj gates have been opened by Gargulaz of the Alliance. 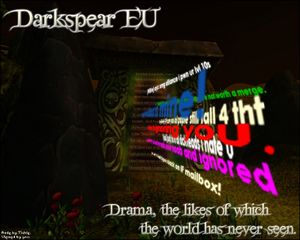