This realm is connected to the realm Zangarmarsh US 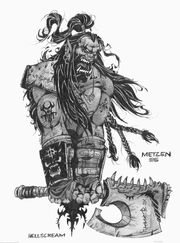 Hellscream is a central time zone PvE server for Blizzard's MMORPG, World of Warcraft. It is a high population server that has been around since the opening of World of Warcraft with a thriving economy, a dedicated raiding base, and a strong player community. It used to have one of the best Alliance to Horde ratios of any server, but realm transfer adversely affected the Horde side, shifting the balance to Alliance by 3 to 1. It has also caused the server to become hostile towards other realm recruiters, especially those that target Horde players.

The server's name comes from the character Grom Hellscream.

Hellscream was one of the original realms, available on launch day in November 2004. Some notable guilds that formed on the server in the early period were Forgotten Legacy, Keepers of the Faith, and Immortalis. In the Spring of 2005, Alliance raiding guild Brainstorm fell apart over various issues, and many members were absorbed by Forgotten Legacy and Keepers of the Faith. Also in the Spring of 2005, Return to Honor reformed under the new guild name Attrition after a falling out with their leader, Aldrek.

Most curiously to note in Horde history is the conception and later performance of the Horde group that is often referred to by many as "The Horde Pickup", though they call themselves KuG or the Koalition of Uber Guilds. KuG was named jokingly after Kug, the first known Horde player to ninja something from Azuregos. This group was formed under the banner of multiple different Horde guilds in early/mid 2005 and to the surprise of the community was their ability to achieve what only a normal functioning guild should, even managing to grab the first Horde-side kill of Razorgore the Untamed in Blackwing Lair. The original KuG later formed the guild Time Out and allowed for KuG 2.0 to assume the mantle of Horde PuG masters of Hellscream.

Throughout the fall of 2005, the Alliance guild Echoes of Elysium also began to establish itself as a major raiding guild on Hellscream to complement the likes of FL and KTF.

The opening of Staghelm transfers due to overwhelming queues in the latter portion of 2005 become a turning point in Hellscream's history as this was the server's first exodus. Some saw this transfer as an opportunity to escape reputation problems on Hellscream as well as providing the opportunity to re-align the balance of force on Staghelm. Several well-known guilds such as Attrition, Dawn, and The Foundation transferred as well.

A second character transfer later opened up on Hellscream to a new server, Khaz Modan.

On April 10th, 2006, Blizzard opened transfers from Hellscream to Dalvengyr, a new PvP server. Many took advantage of the chance to experience a PvP server with their main characters. Many guilds transferred as well, including Immortalis, Echoes of Elysium, Element Zero, and Forgotten Legacy. This transfer severely thinned the server's ranks and dropped it from the high population tier.

On February 6, 2006, Hellscream completed the war effort in a three-way tie for 10th place among all servers. The gong was rung by Araex, mage of Immortalis. As with many other servers, there was a large debate among those on the server as to participation in the effort and why it mattered, which inevitably let to conflict within the community. Both Forgotten Legacy and Xiled Horde sponsored a raffle contest to aid in the war materials turn-in, which inevitably sped up collection efforts, a contribution duly appreciated by the server. A lingering effect of the War Effort opening was the conflict created by Immortalis's decision to open the gates at a time while server population was high, inevitably leading to server crashes. The resulting backlash from raiding guilds such as Keepers of the Faith, Forgotten Legacy, and Echoes of Elysium deteriorated relations between the guilds for a time.

As with many servers, PvP games between Alliance and Horde continue to spur controversy at least weekly between the Alliance and Horde. Common points of conflict include AB zone killing, exploitative positions in AV and AB, as well as many other issues. Often times these issues will originate from either "GM group" of either faction (GM group meaning the group with the person next in line to receive the highest rank possible in PvP).

This is a list of players that have made Grand Marshal on the Hellscream server, in order:

This is a list of players that have made High Warlord on the Hellscream server, in order:

that have obtained the title Conqueror on the Hellscream server, in order:

that have obtained the title Justicar on the Hellscream server, in order:

While these guilds may not be on Hellscream any longer, they are part of Hellscream history. Many of these guilds no longer exist, having disbanded, transfered or reformed.